Al-Shaheed Road in Amman has a significant volume of traffic throughout the day. Unfortunately, the traffic at this street is experiencing excessive delay and congestion. The intersections on this street were studied by collecting and analyzing actual data consisting of traffic volumes on each direction of movement on the intersections. In addition, the roundabout of the Al-Mashaghel on Al-Shaheed Road was taken into account and a study was carried out. Sidra intersection 5.1 software was used for data analysis. The final results obtained were used to describe the level of service of the intersections on this street and to provide possible solutions for the congestion problem. A number of alternative solutions were considered to minimize delay and congestion.

The analysis showed that Tariq intersection and roundabout Al-Mashaghel have a traffic problem during peak hours. Many solutions were proposed to reduce these problems: 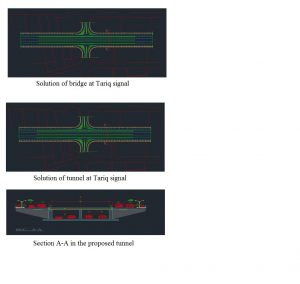