Project aims to investigate energy saving for refrigeration systems by using DC compressor and electronic expansion valve. Building up two refrigeration systems to examine which one is more efficient than the other. The first one is used the traditional way to build up the refrigeration cycle for cold rooms and chiller cabinets using ON/OFF compressor and mechanical TV, and the other one used the variable speed compressor (DC compressor) with inverter and used the Electronic expansion valve EEV instead of the mechanical expansion valve which used in traditional cycle. Energy conservation and performance were discussed for both systems; also a power consumption comparison between two systems were carried out value of energy saving rates. 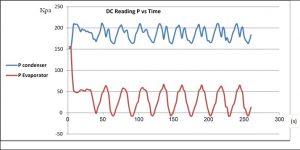